It’s safe to say Microsoft has taken the path of strength and brutal honesty for 2021. Recently, Microsoft has uploaded a video of their latest advertisement for the Surface Pro 7 through the MS Power User. As MacRumors reports, the whole video can be summed up into 30 seconds of a young boy proving why the 2-in-1 Microsoft Surface Pro 7 laptop is better than the current MacBook Pro from Apple. Straightforward and savage. Check out the video below.

The video begins with a young boy talking about Macbook Pro’s Greatest weakness according to many reports and complaints online, which is the Touch Bar. The boy then contrasts this with Surface Pro’s touch screen laptop and Stylus capacities. He praises the device by saying and ridicules the Macbook by saying

“The Surface comes with a pen and it is touchscreen. Mac gave me this little bar, but why can’t they just give me a whole touchscreen?”

Many users online have expressed their sentiments on Apple’s lack of touch screen for the Macbook Air and Macbook Pro. For many, it doesn’t make a lot of sense since Apple is doing well with their touch refresh rate for iPhone, iPad, and even their iWatch. Then they put this small touch bar just above the keyboard which, to others, is too small or obnoxious. Many critics asked why Apple just can’t make touchscreen laptops when other competitors and tech giants have clearly been doing it for a long time now. 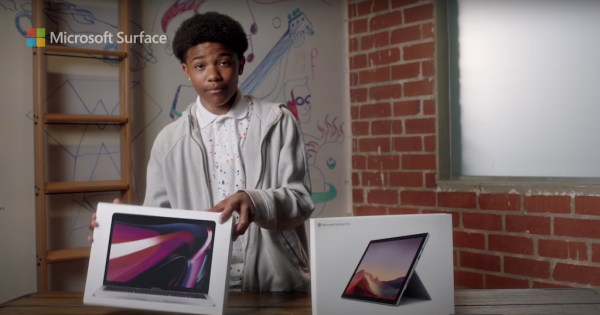 It seems that Apple is aware of the backlash that it receives from people about the Touch Bar feature. Famous Apple analyst Chi-Ming Kuo said through Mashable that the company is replacing the Touch Bar with physical keys for the upcoming new generation MacBook Pro 14-inch and 16-inch models. Furthermore, the upcoming Macbook Pro is said to be bringing back so many features from the past with an improved design. It will also be removing many features from the current generation Macbook Pro Models.

Microsoft also aimed fire at Apple’s Keyboard. The video goes on by saying that the Surface Pro has a detachable keyboard as compared to the Macbook Pro. “You’re kind of just stuck with what you got” for Macbook Pro, according to the boy in the video. Microsoft highlights how it can be versatile with its keyboard, but also slightly throws shade at Macbook Pro’s heavily criticized butterfly keyboards.

Furthermore, the video boasts that the Surface Pro “has the power to run all your apps” and “is a much better gaming device.”, targeting their power difference between Macbook Pro. Although this part can be debatable, it is indeed a bold claim by Microsoft.

To wrap up the video, Microsoft went with the most practical reason: How the Surface Pro is a much cheaper machine than the Macbook Pro. The starting model of Surface Pro 7 with a 12.3-inch display retails at $749.99. However, note that this does not come with other accessories such as the keyboard attachment and stylus yet. On the other hand, the Macbook Pro starts at $1,299 for the M1 model and $1,799 for the Intel Model.

Apple has not released a comeback yet for Microsoft’s savage ad as of the moment. For now, Microsoft clearly gave a huge hit with their recent ad for their biggest competitor, Apple.

Mon Jan 25 , 2021
Netflix Upgrades Audio for Android Viewers with xHE-AAC: How to Improve Sound Quality on Netflix  ( Screenshot From Pxhere Official Website ) Netflix is rolling out an upgrade for its Android Viewers that will reportedly make their life a whole lot easier as the audio is said to function much better with […]